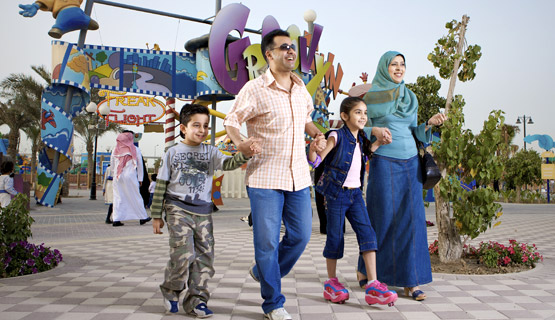 Adhari is a brand new visitor attraction that will open under the patronage of his majesty King Hamad bin Isa Al Khalafa, at April2008. It’s adjacent to the existing Adhari National Park.
It is located to the north of the Sh. Isa Bin Salman Highway between the Salmabad Interchange and Kingdom of Bahrain Map Junction, on the main highway to the King Fahad Causeway to Saudi Arabia. It’s expected to attract more than 800,000 visitors in a year, with parking space area for approximately 1200 cars.
The site is some 165,000sq meters, providing the complete leisure experience for the whole family.

The development has an attractive location with great visibility from the Sh. Isa bin Salman Highway and in close proximity to key residential hotspots.

The development also has a fully developed infrastructure, road network along with ample parking spots for its high number of visitors.

ADPC is strongly backed by its shareholders which are well-respected institutions in the local GCC markets.

The Adhari Park is a brand new visitor attraction initiated by His Majesty King Hamad on the April 21, 2008.

The development itself is designed to provide a complete entertainment destination for the visiting Kingdom of Bahrain and GCC families along with ample parking spaces sufficient for 1600 cars.

The Development flanks the highway that connects to the causeway leading to Saudi Arabia, and is located to the north of the Sh. Isa Bin Salman Highway.

The project has exceptional visibility from the Sh. Isa bin Salman Highway and is only a 5 minute drive away from the Kingdom of Bahrain – Saudi Causeway.

According to the Ministry of Tourism, 8 million visitors came through the Kingdom of Bahrain–Saudi Causeway alone in 2009 making the location a prime marketing opportunity

In concept the layout is simple and direct. A group of buildings housing the major indoor activities is organized close to the main car parking area.

The entrance to the park is defined by a covered wall, which delineated the Entry Court landscaped with palm trees.

Opening in the wall leads to a central landscaped court with a fountain and a prominent vertical feature.

Across the courtyard is the main the main Food Court and the Indoor Entertainment Hall, which also accommodates an 10 lane bowling alley.

The four major elements are arranged to define directional passage connecting to the different facilities beyond. Shops are aligned on either side of the passage leading to the lake, which provides the ambience of a traditional souk.

The passage between the Multipurpose Hall and the Food Court connect to the mosque and the existing swimming pool.

The site will be some 165,000sq meters, providing the complete leisure experience for the whole family.
OUR vISION
APDC’s vision is to become the No#1 family attraction in GCC.
OUR Mission
APDC’s mission is to identify new, value-added family attraction; offer innovative investment products and professional advisory services to our clients; forge enduring and mutually beneficial relationships with our business partners; and provide our staff with an inspiring and rewarding work environment.
OUR Values
APDC’s values of integrity, innovation, client service, performance and team spirit, serve to guide our personal and professional behavior.
Adhari park facilities

Multi-Function Hall (i.e. Birthday parties and all types of events).
OUR Values
APDC’s values of integrity, innovation, client service, performance and team spirit, serve to guide our personal and professional behavior.
Capital structure and shareholders
APDC’s authorized up capital is BD 7 million consisting of 7 million shares each worth BD 1 and fully paid capital of BD 6 million.

Winner of Bahrainization award awarded by Ministry of labor – 2009